Nicholas liked St. Petersburg, but his favorite place in all the world was the family’s 3,000-acre estate, Isvara. There they spent summers and winter holidays. Later Nicholas would say, “Everything special, everything pleasant and memorable is connected with the summer months at Isvara.”

The original owner of the estate had named it after returning from a trip to India. “Isvara” is a Sanskrit word. One of its meanings is “sacred dwelling” or “ashram.”

Isvara was about fifty-five miles from St. Petersburg. It was a boy’s paradise, a place for adventures like the ones in Nicholas’s storybooks. Its magic influenced Nicholas for the rest of his life.

The two-story manor house, built of white stone, was surrounded by a large park. Close by was a lake. The fresh pines in the huge forest nearby smelled wonderful. Nicholas loved to hike over the lush hills and dip his feet into the cold, trickling streams. What a relief it was, after the stale city smells of St. Petersburg, to fill his lungs with the delicious air!

Nicholas often lay on the grass and gazed at the vast northern skies. He imagined all kinds of pictures in the ever-changing clouds. Over there was a horse and rider, there a hero with a turban!

Other things at Isvara inspired his imagination. On a wall in the manor house hung a magnificent painting of a snow-capped mountain in the Himalayas named Kanchenjunga. The scene was bathed in the fiery glow of sunset. “Some day I will visit a mountain like that, and I will have adventures, too,” thought Nicholas. He imagined himself on a shaggy horse or a sturdy yak trudging up and down snowy slopes. Many years later, Nicholas did his own painting of Kanchenjunga. It became very famous. 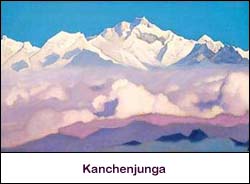 Summers passed quickly at Isvara. His mother often found Nicholas curled up in a comfortable chair in the family’s library absorbed in dramatic Russian tales and legends from long ago. The future archaeologist often thought to himself, “Maybe I can find ancient treasures some day!”
Nicholas did indeed find treasures–and he didn’t have to wait long. A well-known archaeologist named L.K. Ivanovsky visited the family at Isvara when Nicholas was about nine. How exciting! And what was even better was that Mr. Ivanovsky invited him to go on an excavation.

“Nicholas, I’m going to start excavating a burial mound near the village today. Would you like to help?” Mr. Ivanovsky asked one day.

“Sure!” Nicholas said. He ran to collect a walking stick and shovel.

Soon the two arrived at the tiny village of Volosovo, which was surrounded by mounds of dirt and jagged stone piles dating back to ancient Russia.

Nicholas helped Mr. Ivanovsky for two days without finding anything but rocks. The third day he was digging, digging, digging through layers of hard-packed dirt. BANG! Nicholas’s shovel hit something hard–and it wasn’t a rock. Finally he had found something!

“It’s a sword! A real sword!” yelled Nicholas, as he uncovered a long metal object.

“Excellent, Nicholas!” called Mr. Ivanovsky. “This is exactly what I was hoping for!”

The sword was the kind that Nicholas’s historical heroes had carried. How often he had imagined one just like it in the games he played with his copper-colored wooden sword. This was so much better! Wait until his friends back at school heard about his sword!

Nicholas helped Mr. Ivanovsky whenever he could. Together they found axes, broken pottery, bronze bracelets and even shimmering silver and gold pieces from the tenth and eleventh centuries. Unearthing real relics and treasures just like the ones in his history books made Nicholas’s heart pound with excitement.

While he was still a “May bug,” Nicholas received permission from the Imperial Archaeological Society to do his own research on the archaeological sites near Isvara. He carefully dug through the layers of dirt to uncover the relics. He kept detailed records of every find and even made sketches showing the exact position of each piece before he moved it. Nicholas developed a lifelong passion for archaeology.

Nicholas was busy with other things too, but he had such concentration that he did everything well. His room overflowed with his collection of artifacts, minerals and plants. He even catalogued birds and collected eggs for the scientific studies of the St. Petersburg Forestry Department.

Nicholas’s parents knew that he could finish everything he started, but they could hardly imagine how he kept track of so much. Throughout his life, Nicholas did many things at the same time, without sacrificing quality in anything. That is very hard to do.

Nicholas also developed an interest in hunting, which he came to in an unusual way. Each year when his family returned to the dampness of St. Petersburg, Nicholas caught bronchitis. His doctor had a unique prescription: Nicholas should spend more time outdoors in the winter!

So as a teenager, Nicholas spent long hours trailing various animals in the frigid Russian climate. And it was a frightening experience during a hunting trek that led him to discover his life’s work.

1. Find the Himalayas on a map, and try to locate Kanchenjunga.

2. Make your own picture of Kanchenjunga.