Chapter 1: "One Who Overcomes, Rich in Glory"

“Rigden Djapo’s eyes never close. In his magic mirror, he sees everything that happens on earth. His powerful light can destroy all darkness.”

The storyteller’s piercing blue eyes blazed in his tanned, bearded face. His melodious voice went on, “Rigden Djapo is the ruler of Shamballa, a secret place in a hidden Himalayan valley that is the link between heaven and earth. His throne is made of blue wings surrounded by flowers.” 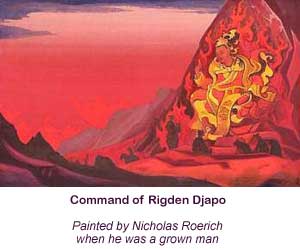 In the cozy living room in St. Petersburg, Russia, the Roerich family and their friends sat spellbound. Soft lamplight surrounded the cluster of comfortable chairs. The occasional muffled beat of horses’ hooves floated up from the snowy street below. The rest of the city was preparing for bed, but no one in the room was interested in sleep.–

“It is said that great darkness will some day come upon the earth. There will be wars, kingdoms will be destroyed and underground fires will shake the earth.

“And one great day,” concluded the storyteller, leaning forward in his chair, “Rigden Djapo will assemble his army and lead the warriors of light in a victorious fight against evil. Then the great era of Shamballa will begin. Peace and beauty and truth will reign over all the earth.”

The room fell silent except for the crackle of flames in the fireplace, as the friends sat lost in thought about the promised era of Shamballa. No one had noticed the tired, fair-haired little boy hiding behind an armchair. Electrified by the story, he was thinking over and over, “That’s me! I am a warrior of light. I am a warrior of light!”

As the group began to stir, his mother found him in his hiding place. “Nicholas,” she chided, “you are supposed to be in bed!”

“I know, Mama, but I wanted to hear the story!” Gently, his mother sent him off to dream fantastic dreams.

Nicholas Konstantin Roerich was born on October 9, 1874, in St. Petersburg. From the beginning, he had a lot to live up to. “Nicholas” means “one who overcomes” and “Roerich” means “rich in glory.”

When Nicholas grew up, he became a twentieth-century Renaissance man. He had at least seven careers: artist, writer, philosopher, explorer, educator, archaeologist and international leader for peace. He was a glorious overcomer in many ways.

The Roerichs’ home was on the bank of the Neva River in St. Petersburg. Nicholas’s father, Konstantin, was a serious-looking man with a flowing beard. Trained as a lawyer, he was a successful notary who helped his clients with wills and other legal matters. His office was on the first floor of their home. Nicholas’s mother, Maria, was a sturdy woman with wide-set eyes. She kept house for her family on the second floor. Nicholas had an older sister, Lidia, and two younger brothers, Boris and Vladimir.

Guests often visited the Roerichs in the evening. The Roerichs knew many famous and interesting people, and lively discussions were the entertainment. Some of the guests talked about politics, science or art. Others told stories about their exotic journeys across Asia and what they had learned on their travels. Whenever Oriental topics came up, Nicholas was all ears. Caravans! Eastern adventures! What could be more fascinating?

Even with these exotic tales to think about, Nicholas still had to go to school. But he didn’t start at age five or six. Like most upper-middle-class Russian children at that time, Nicholas was taught at home by private tutors until age nine. Then he took the entrance exams for a rigorous private school headed by a professor named Karl von May. When Nicholas easily passed the exams, the professor exclaimed, “Here we have a future professor!”

Nicholas proudly became a “May bug,” as Professor von May’s students were called. Each day, he ate an early breakfast and walked the short distance to school in the clear morning light. The professor would be waiting at the top of the inside staircase to greet each student. He was a short, bearded man with gold-rimmed spectacles. He always wore a long black coat with a bright red and yellow handkerchief poking out of the pocket.

“Good morning, Nicholas,” Professor von May would say. “Welcome to school!” And he would shake Nicholas’s hand vigorously.

“Good morning, Professor,” Nicholas would reply. He learned to hold on tight and return the handshake with a good strong grip. Perhaps this helped Nicholas later when he visited so many foreign countries and met so many important people.

Nicholas excelled in all subjects, but his favorite was geography. He especially loved to draw and color the large maps assigned by Professor von May, who was his favorite teacher. The maps reminded Nicholas of the faraway places his parents’ guests talked about.

Nicholas also loved his professor’s three-dimensional geography assignments: sculpting mountain ranges out of plasticine, which is like clay. One day, as he sat at a table finishing a model of the Alps, he had an especially dreamy look in his eyes. The soft, sweet smell of spring was blowing in through the open window.
“Nicholas, you have plasticine on your nose! What are you daydreaming about?” asked one of his friends.

Nicholas wiped off his nose, pushed up his glasses and whispered, “Isvara.”

1. Look up St. Petersburg, Russia on the Internet and find out where Nicholas lived as a child.

2. Look up Nicholas Roerich on the Internet and see some more of his paintings.